Last weekend was in-sane. Similar to most twenty-three year olds I know, my weekends are a spectacle. And by spectacle I mean my book club is getting out of control. You put too much paprika in the deviled eggs and the claws really come out. Not to mention the fact that on Saturday twelve, eighty-something year-olds received their disappointment of 2011 when I ruined the ending of this month’s book. In my defense, I think we all knew how A Farewell to Arms was going to turn out. The unrest that followed grew intense, then disorganized, then confusing and ultimately ended with my dismissal. It was both aggressive and unanimous. When Hester left to go to the bathroom for the fifth time that hour, my one ally, much like her bladder control, was gone. The room managed to become so cold and damp that during the vote stalactites began to descend from the ceiling.

I should have seen this coming. The lipstick stained dentures club, better known as Delores, Cecelia, and Ruth, have never been my biggest fans. After the Stephen Hawking/Stephen King debacle of January 2008, my forced departure was merely impending. All the old bags wanted to discuss was the Big Bang and I didn’t read The Shining for nothing! Book jockey vigilantes. Looking back, it was a recipe for disaster. Then again, I’ve always been one of questionable judgment and taste. I like to think the Naked Gun films are O.J.’s greatest legacy and Ringo is my favorite Beatle. While keeping this in mind, I promise olive oil granola isn’t as crazy or as gross as it sounds.

This granola is my favorite (to date). It’s simple, but delicious. The thing about most homemade granola is it often comes coated in butter and sugar. Instead, I’ve made one that is both heart healthy and tasty to boot. So I present to you Kimberly’s Olive Oil Granola. Bowl, spoon and milk – enjoy this stuff the traditional way as the perfect breakfast or evening nosh. Use it to top your yogurt or ricotta cheese and add some fresh berries for a great afternoon snack. Stir into ice cream for a little extra crunch. Add pretzel pieces and dark chocolate chips for the best trail mix EVER. The possibilities are endless. You are so very welcome.

In a large bowl combine oats, pumpkin seeds, almonds, walnuts, shredded coconut and cinnamon.  In a smaller bowl mix oil, maple syrup, honey, and salt together. Add wet mixture to larger oats bowl. Stir to combine. Fold in frothy egg white. Spread onto cookie sheet with a lip that has been lined with parchment paper.

Bake at 300F for 45 minutes, stirring every 10 minutes.  Allow to cool. Add raisins and store in airtight container(s). 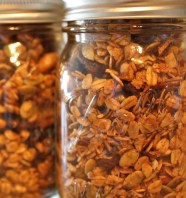